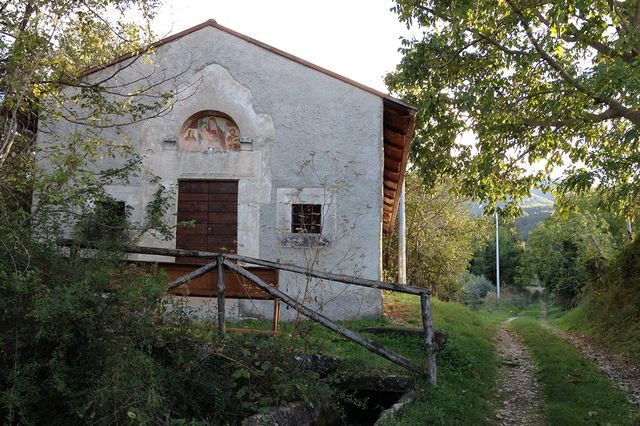 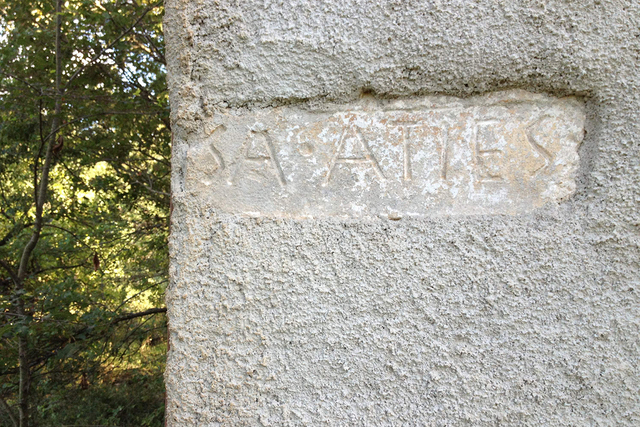 The country church of San Giovanni Battista, one of the oldest in the diocese of Sulmona, was at one time used by the Benedictine monks of San Clemente a Casauria. Its existence is, in fact, confirmed by a document dated 1076 from the archive of the Cathedral of Sulmona.
The church must therefore have been built in the previous period, perhaps before the year 1,000.  It was later transferred to the care of the Cathedral of Sulmona, thus ceasing to be considered a church of Introdacqua, and therefore not mentioned in any of the local documents.
The church is located, then as it is now, on the side of a country road that descends north from the hamlet of Carlocce and is bordered by an irrigation channel that has always created serious problems of water infiltration and consequently casued various incidents of structural damage .
St. John the Baptist has always been worshipped by the local community, so that the Via Crucis, made up of 13 painted shrines which mark the route from the village to the church, has been the subject of a continuous pilgrimage.

The church has a very compact and solid architectural structure with a gabled roof. On the main facade there are two tile windows with railings either side of the doorway. The portal, built with reused stone material from Roman times, has a lintel supported by small ledges, surmounted by a lunette frescoed at the centre with the image of the Madonna and blessing Child, flanked by the figures of two saints: on the right is St. John the Baptist, holding a cross with a band bearing the words "Ecce Agnus Dei"; on the left is another figure, of uncertain identification. The celing of the lunette is painted with ornamental plants placed within geometric panels with alternating foliage and large blooms of flowers. Outside the lunette are visible traces of a triangular shape, where there might have been a pediment, which would seem to indicate the likely presence of a protruding porch, typical of the oldest medieval churches.

The interior is particularly attractive. It has a single nave with an apse and simple wooden trusses and is lit by two large side windows. On the walls are traces of frescoes - the likley remnants of a series of paintings characterised the entire environment: on the right, in a large box, perhaps from the late 14th or early 15th century, is the Madonna and child between the Archangel Michael and St. Paul. On the wall behind the altar in front of the apse, there is an 18th century painting with St. John the Baptist and to the left of the apse there is a 14th century fresco depicting San Berardo dressed in his Bishop’s clothes. On the right is the coat of arms of the University of Introdacqua.