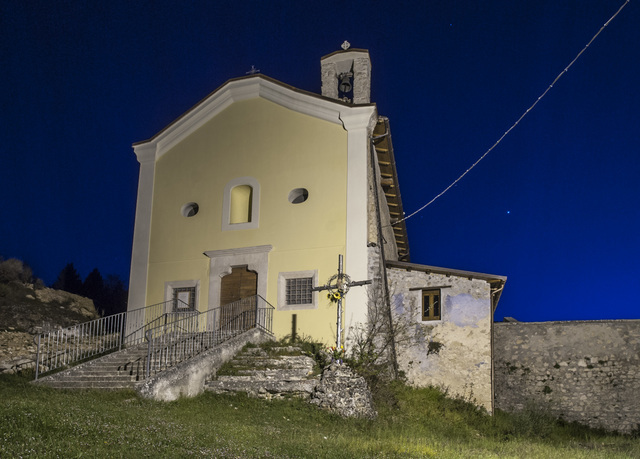 Hours: Open during the feast of the patron saint on the penultimate Sunday of August

In a panoramic position, situated on a hill at 740m above sea level, is the church built in 1518 by the Abbot Marco of Monte Cassino.  This is stated on the lintel at the entrance to the hermitage (later transformed into a cemetery) and originally dedicated to Saint Anthony, due to the rapid spread at the time of shingles known as “fuoco di Sant’Antonio” (the fire of Saint Anthony).
Inside there were originally two statues: that at the altar of Saint Anthony Abbot, patron of the church, and on one side of the aisle that of St. Anthony of Padua. Only later, when in 1764 a new refectory was created within the parish which was dedicated to St. Anthony Abbot was his statue moved there and the rural church was rededicated in favour of the Saint of Padua, whose statue was then transferred to the altar instead of the previous one.
Always the object of devotion, the saint is honoured and celebrated every January, on the occasion of his anniversary.
In 1841 a cemetery was opened next to the church, which remained in use until the opening of the new one in 1912.  On this occasion a great oil painting on canvas of the Virgin with the Holy Souls was placed inside the building of the Church.

The front of the church, which is completely plastered and painted in two colours, has a wide staircase access, now partially covered by a more recent staircase with railings. The remaining perimeter walls retain the old facade stone and the strong buttresses at the sides. On the façade there is a horizontally crowned stone entrance way with corner ledges that support the architrave. At either sides are two tile windows with a splayed profile. Above and in line with them are two oval windows and a central niche in line with the entrance way. A small bell tower stands on the right of the roof ridge which has a polygonal profile. To the right side of the building, the old cemetery with some tombstones is still visible.

The interior has a single nave and a barrel vault with lunettes. On the walls there are precious frescoes from the 15th and 16th centuries with scenes from episodes of the life of the saint, which have recently been restored. Under the wide triumphal arch is the Baroque high altar, on which there is a statue of St. Anthony of Padua and Child.